Update: I’ve produced a video review of the Play:1

Attending a Sonos demo is an interesting experience. Several times during the Play:1 demo both Craig (Sonos’ director of product management) and I seemed to enter an alternate space, where listening to music was more important than talking about Sonos products. That’s an interesting effect, which speaks to a shared interest in listening to music over evaluating products.

One expects to the impressed at a demo – it’s a structured environment, the music is mostly pre-selected, the time is short, and there are lots of distractions. So I was happy to receive a loaner Play:1 at home for some extended, undistracted listening. 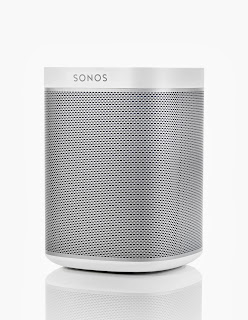 The unit is small – 12 centimetres by 12 centimetres and 16 centimetres tall. It’s available in “black” and “white”. The design is modern and elegant. There are ports to connect power and Ethernet as well as a socket for wall mounting.

In addition to doing some undistracted listening, I used the Play:1 for background music and playing the radio while cooking, eating and reading. At this point, I can’t bear to part with it, so I ordered a pair, which arrived a few days ago. I’ve evaluated Sonos systems in the past, but I’ve honestly felt them to be expensive – partly because in addition to the units themselves, you must purchase a $60 bridge component if you plan to use the speaker(s) wirelessly – meaning in any room where they can’t be physically connected to your router. (I will note that if you have a Linksys Universal Media Connector you can connect your Sonos component(s) to that also.) 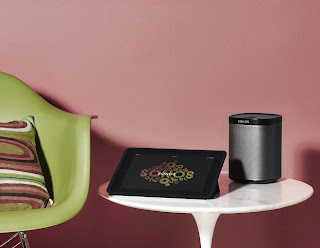 I’ve spent time listening to Lyle Lovett’s Joshua Judges Ruth, Emilie Claire Barlow’s Sings, Simone Dinnerstein’s Goldberg Variations, Bruce Springsteens’ Darkness on the Edge of Town, Angélique Kidjo’s Djin Djin, and Antonio Forcione and Sabina Sciubba’s Meet Me in London. These are the discs I carry around for speaker evaluations, so I’ve heard these on the best speakers. On the Play:1, I played them as iTunes tracks, digitized from CDs using Apple Lossless. (Links to purchase these CDs from Amazon are below. And yes, I make a small profit from this.)

I’m impressed by the full, clear sound delivered by this diminutive device. I’m actually hearing new details on some very familiar music. Bass is full if not particularly extended, and a little soft – the bass drum sounds more like a boom than a thump. One small Play:1 speaker has enough volume to be heard throughout my two-story home. A stereo pair rocks loud enough to entertain the neighbours. Cranked to the max, there’s no appreciable distortion. However, at full volume (nearly the sound level an actual piano in the room would provide) the top end of Dinnerstein’s Goldberg’s is a little brittle – an effect I’m more inclined to attribute to digitization than the Play:1. 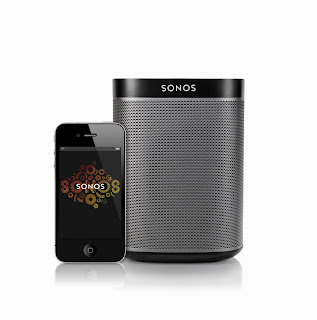 Another journalist at the demo asked the Sonos product manager what he felt the best feature of the system was. The product manager answered “reliability”, which is true; this is the only wireless system I’ve owned or evaluated that never drops out. That is one of Sonos’ clear goals – no interruptions to the music.

But I beg to differ. The best thing about Sonos is their app. I’ve used the iOS versions on both my iPad and iPhone, there’s an Android version and their desktop player which is available for both OSX and Windows. More than any other wireless system I’ve tried (including Airplay/iTunes), the Sonos app provides a single, integrated interface to functionality and music. Everyone in Wi-Fi range can connect, see what’s playing on any speaker on the network, add songs to the playlist, and have their nearest speaker(s) join or leave any “room” or “group”.

The app provides access to your local music library, to online services like TuneIn (radio stations from all over the world), and streaming music services like Rdio, Slacker, Sirius, BBC, Spotify and more. (TuneIn’s own iOS app has a pause and replay feature, which I miss on the Sonos app.)

The app supports alarms, setting both time and day of the week – which I’m using to change the channel to my favourite radio shows during the day. Metro Morning at 7h00, Stanley Péan’s Quand le jazz est là at 17h30, Tim Tamashiro’s Tonic at 20h00. And Danny Marks Blues show on Saturday night. I’m selling a clock radio on Kijiji if you’re interested.

My only complaint about the app is the size of the volume slider, which makes it a little difficult to make small volume adjustments. Incidentally, you can “kill” the app on any device and music keeps playing. Of course, if you stop the computer or network drive hosting your music library …

The speaker has three buttons: pause/play (which works like a mute button), louder and softer. Muting a single speaker pauses all the speakers in a group – very handy when the phone rings while you’re playing Warren Zevon at full volume.

Over the last two weeks I find I’m listening to more music, more often than before. I found a great jazz station in Paris. And I’m enjoying the whole experience. And now that I’m in the Sonos club, I may expand the system further. 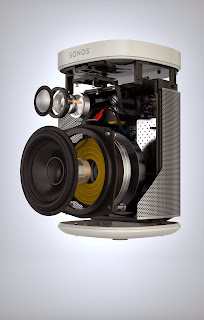 Sonos does not publish tech specs. The amp’s wattage and the speaker’s frequency response curves are not provided. I suspect that there is some colouration, but Craig said they strive to be flat.

Internally, there are two speakers. The only cable is a nicely integrated power cord, which goes straight to the outlet without a transformer brick.  It’s “portable”, as you can unplug it here and plug it in there – it takes about a minute to re-initialize on the system. It’s not as portable as a rechargeable bluetooth speaker like the Bose Soundlink. On the other hand, bluetooth speakers echo all the sounds from a phone or tablet – punctuating your music with beeps and bongs. No interruptions on Sonos, just music.

Setup is simple – the app has a wizard for that. You’re never asked to do more than confirm a setting or press a button. No networks need to be selected or passwords entered. (ahhhh ….) 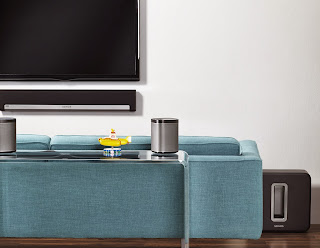 You can use a Play:1 speaker as a single unit, pair it up with another for stereo, or combine it with a Sonos playbar and subwoofer for video 5.1 surround. Or with any other speaker(s) in the Sonos lineup. Each speaker can be programmed to play the same music (and Sonos is the only system I’ve tried that provides solid synchronization of sound between rooms) or different sources.

Clearly this system is not a match for an Anthem SACD player, a Bryston amp and Totem speakers. (Partly as it’s made in China.) But for casual listening, for background listening, this is a system that delivers way beyond my expectations at this price point (C$219).

In fact, this price point is so aggressive and the sound so impressive that I would fully expect that the big brother Sonos Play:3 will see a steep sales decline. I also find the Play:1 to be a more attractive design that lends itself better to placement. Craig says that they’re designed to be used in humid environments like a bathroom.

Sonos has a great solution, with multiple configurable components to suit just about any need. The one Sonos component that’s missing is an input component with mini plug, RCA and optical inputs that enables me to connect audio from systems like my computer, CD player, turntable and other devices to play them throughout the Sonos system. 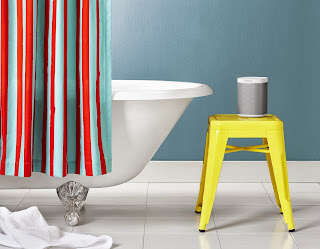 But wait, if you act now – this starting to sound like a late night TV pitchman – Sonos is adding the bridge to the C$219. Play:1 package price. They arrived via Purolator a couple of days after I ordered.

The speakers can’t be turned off, so they’re always drawing phantom power, even when you’re not listening. When off, they draw about 10 watts, at full volume up to 20w. The bridge draws about 4w. At my Toronto Hydro rate, if I play a single Play:1 for 6 hours a day, I’m estimating annual cost would be about $20., or less than 10 cents per day. About $35 annually for a pair. Totally worth it.

I am not affiliated with Sonos, and although I received a discount on my purchase, I receive no compensation from them.

Always happy to have your comments, I read and reply to all.

Here are the CDs I mentioned. Great music and great engineering.

Here are a few of the tracks that I use to listen to audio/stereo/home theatre equipment.

Simone Dinnerstein J.S. Bach Goldberg Variations (Telarc CD 80692) Compressed files really don’t handle solo piano well – and the transition from the aria to the first variation is particularly ear-opening. Set the level so that the aria sounds like a piano in the room and wait for the fortissimo attack of the first variation.

Antonio Forcione and Sabina Sciubba Meet Me in London (naim cd021 – sadly the only recording they made together). For a well-recorded voice play Caruso, for a terrific percussion and guitar track, play Brasilico. For a reference to see how good these tracks can sound, go to Bay Bloor and listen on the totem forest speakers. Sabina’s voice literally comes out of the speakers on the former, the snap of the drums is tight and powerful on the latter. Listening to Caruso on a high end playback system has brought tears to my eyes.

Lyle Lovett Joshua Judges Ruth  (Curb MCAD 10475) The depth and breadth of the soundstage of the various players and singers in Church is the best cut I know for judging stereo placement, left to right and back to front.

Angelique Kidjo Djin Djin (razorandtie 79301822967-2) Although no recording can do justice to the power that Kidjo displays live, Gimme Shelter (with Joss Stone) does a pretty good job of raising the roof while opening your heart to the emotional power of this tune. Great bass, killer horns and searing vocals to challenge any system’s clarity when confronted with a wide-spectrum wall of sound.

Updated April 24 2014 with better details and links for music selections.